skip to main | skip to sidebar

Our plan is to have a stuffed chicken with all the fixin's since it will be just our little gang. Since we last wrote the kids have been busy taking Karate lessons and love it. We have been unloading the boat and watching the water line rise. The weather has been fantastic or maybe it's because we have the heater on in the morning and are not suffering like last year. To all our family and friends back at home who are enjoying family on Thanksgiving....you are in our thoughts and enjoy every minute of being together. Missing you all very much. 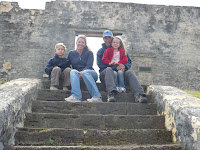 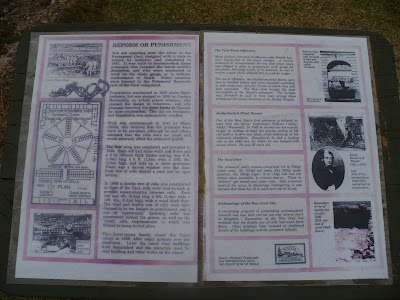 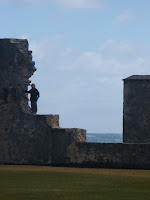 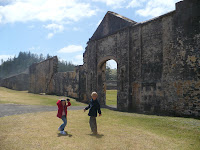 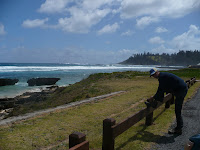 Anchor up, sails out and we are underway once more. Our next destination Gulf Harbour. We will do it in two long days with a night stop in Tutukaka. After spending the night joking about the name Tutu"KAKA".... We are now moving along on our second day and should be into Gulf Harbour Marina this evening at 6pm. The view of New Zealand coast is story book beautiful. Rolling hills, green grass, spectacular rock formations and cool crisp air.

Opua - After checking into Opua. We spent a few days of "celebrating" with friends, cleaning up the boat after 6 months out at play and grocery shopping. The weather was great this year compared to last year which made it much more pleasant. We cruised out through the bay of islands and once we passed the pierced rock we heard a call of a boat that just spotted killer whales near by. Our eyes where peeled all day but no whale spotting. We will keep looking.

Land Ho! Cruising down the coast of New Zealand

Magical, just magical! As we rounded North cape the sun light was beginning to color the sky pink and red and the Moon lit my trail behind me. We are motoring with no wind and flat glossy seas. The sea birds are in full force looking for breakfast...skimming over the water dipping a wing here and there for fun. We made a "BeBe Special" breakfast this morning with bacon, eggs and toast. Should be arriving in Opua this evening along with a group of others. Looks like there will be a party on the Q dock!
Posted by S/V Free Spirit at 3:11 PM 1 comment:

Day 2 - Beautiful day in the middle of nowhere land

360 degree view of the ocean, can't complain. I know people back in the states who pay a fortune for a view like this!! Today was a spectacular cruising day with speeds well into the 9+ knot range. We made enough headway to make it into New Zealand Wednesday night. The winds have clocked around to our stern and we are motoring along now at 7. Ha, imagine yourself driving over 300 miles at 7 mph down a highway. Well, when it comes down to moving my entire house this way it's pretty amazing. It's cool to never have to pack a bag and travel as much as we do. Don't like the neighbors? lift anchor... Tired of the same view? move on... Ready for a new experience? raise the sails. But, can't pickup the phone and call mom :(. We are very happy and doing great. Looking forward to landfall.
P.S. We caught a nice Albacore Tuna today.
Posted by S/V Free Spirit at 12:51 PM No comments:

We are underway to New Zealand after spending a magical 5 days in Norfolk Island. Norfolk is on our top list of favorite stops. On Saturday morning we got a VHF call that Tony, one of the teachers I met at school, and his family were wondering if we wanted to go to the local market. Now, if you saw how the boat was rocking and rolling you would understand why we jumped on that offer. Tony and Lucy Janssens and their wonderful 4 children (Marley 7, Inaia 5, Ruben 4, and Romany 2) made us feel like part of the family. Unfortunately, Paul had to stay on the boat due to the conditions:(. The day we spent with them is a day we will cherish for the rest of our lives. To top things off, it was Halloween and a few of the residents really put on a great show. My kids entered haunted houses, drank potion and loaded up on "lollies". I can't wait to upload some pictures of our stay in Norfolk. When we departed this morning, our friend John Buffett hailed us on the VHF to say good bye and to let us know we will not soon be forgotten. Just an added cherry to the already heavily frosted cake. Norfolk, my hat goes off you all of you.

As I write we are 70 miles from Norfolk heading south into 15 knots of wind at a close reach. The seas are decent and we are enjoying our first day out. We expect a 3 to 4 day passage into New Zealand. Not 100% sure if we will land in Opua or Mardsen point. There are a few people we need to meet but we also want to get the kids into school and settle down at Gulf Harbour Marina. At this point we will let the weather dictate our first NZ destination.

Bumping along in Norfolk

The reason why most people miss out on this wonderful island is because the island doesn't have a decent bay to shelter from the wind, waves and swell. Cascade bay is the best one on the island and if you could see us now you would raise your eye brows. We don't have the 4.5 meter swell that is out there but we have the wind coming into the bay and a good wind chop. Mom and Genevieve, it's like the anchorage in Fiji when the storm blew through and then we had that steady uncomfortable rock all night long!!!! The good thing is Merric won't have to go through the adjustment phase the first day out. It looks as though we will have a nice passage down to New Zealand. Tonight is Halloween and we have been invited by a local family I met as school the other day to go Trick or Treat. The kids are so excited!

Let me back up two days ago..a teacher, Susanne Evans, stood on the wharf until someone could come out and get us. She wanted us to come to school and tell our story. We ended up visiting 4 classes and had a fantastic time. The schools have incredible (touch screen) smart boards!! They pulled up maps off the internet and we were able to manipulate them on the board. My kids even had the chance to play T-ball. LOL! You should see what happens with cruisers on land.

Norfolk Island -- most of the residents are decedents of the famous Christian Fletcher -- ala Mutiny on the Bounty. It eventually reached a point that Pitcairn Island could no longer support the population and most of the people were relocated to Norfolk Island many years ago. Susanne Evans and her family are the descendants from Pitcairn island. She helps celebrate and preserve the rich history of Norfolk island, the original language and filled us in on some ghost stories from the "Convict" days. She is someone I will not soon forget and hope to see again. Thank you.

As a side note: As we were walking down the road yesterday, we were picked up by John Buffett. Of course we asked if he had any relation to Jimmy and he said he wasn't sure but that Jimmy Buffett did come out to the island, with some of his family, a few years back and held a concert. There is a large amount of Buffett's here on Norfolk . Correction: Local population-1800.

S/V Free Spirit
Paul and I had a dream... May 2005 we cut the lines and headed out to sea with our two small children. This has been a wild adventure. We have shared some extreme highs and some very deep lows... We would never have been able to do without the love and support of all our family and friends. We miss you all.